We’ve just returned from northeast Nigeria on a partnership with a private NGO donor. The needs assessment we conducted revealed the utter destruction wrought by Boko Haram. 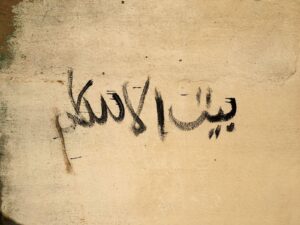 The Arabic reads “House of Islam”, the tag used by Boko Haram to claim family compounds for themselves as they ransacked communities.

During Boko Haram’s occupation, Boko ravaged storehouse, granaries, and wiped out virtually all wealth, especially among Christian communities. When families began to return to their homes after the counteroffensive, they found their homes burned, their food, livestock, and anything of value looted. Not only did the residents of these farming communities lack food to eat, but they had no savings or capital by which to restart their lives.

As we worked in the region, we only found a handful of aid groups, working through local partners, doing small scale humanitarian aid. The lack of oversight by aid organizations on the humanitarian assistance projects resulted in the most vulnerable needs being ignored, and local powerbrokers funneling the aid to their chosen recipients.

We know there’s a better way to assist these communities in dire need, and demonstrate that aid can be delivered to the toughest areas in effective and transparent ways. Over the course of this week, We’ll be posting pics and stories of the people preyed upon by Boko, and what you can do to help during this holiday season.